Bowing In Japan: A Guide for Foreigners

Unlike in western culture, bowing in Japan, known as ojigi, is an important etiquette that is learned from a young age.

Depending on the situation, a bow can be a small nod of the head or a deep bend at the waist. A deep, long bow indicates respect, and a smaller nod is usually less formal.

Bowing in Japan can be used to signify emotions, including appreciation, respect, remorse or gratitude.

Bowing is generally split into two different types, kneeling (zarei) and standing (ritsurei). For both of these styles, you must remember to only bend your body at the waist and keep your back straight throughout.

Knowing how to bow properly in Japan is considered a defining quality of adulthood.

Bowing in Japanese culture is so ingrained that people will often bow when speaking on the phone, even if they are aware the other person can’t see them.

Even though most Japanese people learn the correct technique from a young age, it is not uncommon for Japanese companies to take extra effort to train their employees how to bow in business settings.

If you’re thinking of visiting or working in Japan, it’ll put you in good stead to learn a good bowing technique and etiquette.

Don’t worry about getting it wrong though. Most Japanese people will not expect foreigners to know proper bowing rules, and they’ll probably let you off… probably.

Why Do People Bow In Japan

Bowing in Japan is important in business and social settings. Bowing incorrectly can derail business deals, make you look incompetent or create awkward situations that lead to a loss of face.

Situations Where People Bow In Japan

Bowing in Japan isn’t just a means of saying hello. It is also common to bow in other social interactions such as:

Where Does Bowing Come From?

There is no definitive answer as to why bowing became a thing in Japan.

However, it is believed that it came to Japan with Buddhism between the 5th and 8th centuries.

Bowing is an important gesture of piety and respect in Buddhism.

The warrior class, or samurai, were some of the most respected people in Japanese society for a long time.

Samurai largely followed the disciplined virtues of Zen Buddhism and made them popular in Japan.

This is a widely accepted reason as to why the practice of bowing became so engrained in Japanese social culture. Bowing is an important part of visiting temples and shrines in Japan, read our blog to find out more.

Sometimes, during first time interactions, such as business meetings, Japanese people will offer to shake hands instead of bowing.

Sometimes, you will find that both shaking hands and bowing take place, as each culture wants to respect the other.

If you are in Japan and you aren’t sure, you should wait until someone else moves first and copy them.

In general, handshakes in Japan are rare. Shaking hands in Japan is more significant than it is in the west. It symbolizes things like strong relationships, large deal signings and high profile mergers.

On another note, Japanese culture is not very touchy-feely. For this reason, hugging and high-fiving are not normal things to do in a work environment and should be avoided unless totally appropriate.

Bowing In The Business World

Japanese bowing etiquette and business customs have a reputation for being very complicated. This is especially true for foreigners who are not familiar with Japanese ranks and traditions.

If you perform the wrong type of bow for another person’s status in the business world, you run the risk of offending them.

This is especially true with more conservative Japanese people who take pride in ojigi and other Japanese traditions.

In the Japanese business world, you will encounter three main types of bows. These are eshaku, keirei and saikeirei.

Muscles and posture are very important for each type of ojigi.

You need to make sure your back is straight, and the lower portion of your body remains vertical and firmly planted. That means no slouching and keeping your hips in the same position.

The movement of your bow should also be synchronised with your breathing.

Lowering your body into the bowed position should take as long as one regular inhale.

You then remain in the position for one normal exhale and return to your original stance in time with one regular inhale.

This timing is supposed to ensure a natural movement that does not feel rushed or unbalanced. 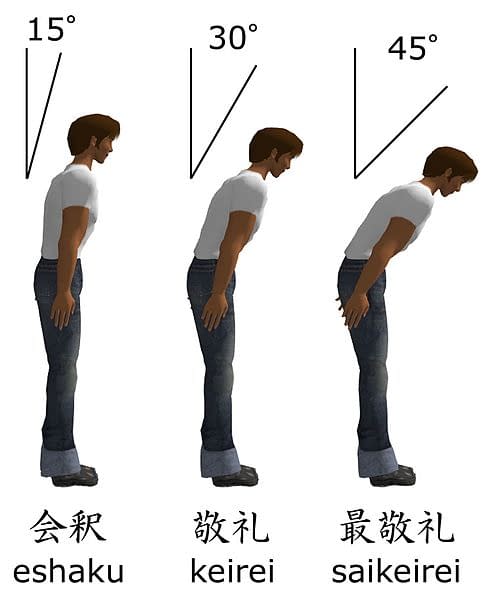 For this type of bow, you should aim to drop your upper torso about 15 degrees.

Your eyes should look to the ground around three metres in front of your feet.

This is a casual type of bow. It is usually performed between people of the same status, or when formalities are less important, like meeting someone by chance in a shop.

To perform this type of bow, you should aim to dip your torso around 30 degrees.

Your eyes should be looking at the ground around 1 metre in front of your feet.

This is the most common type of bow in Japanese business. It is used when greeting clients, entering meetings, and during interactions with superiors at work.

You should aim to dip your body between 45 – 70 degrees to perform this bow.

This type of bow shows the utmost respect to the other person. It is used in situations like greeting very important people, saying sorry or asking for big favours.

Because this bow signifies more importance than the others, you are expected to stay in the bowed position for a relatively long time. This shows respect and sincerity.

For men, during all types of bow, your hands should be kept at both sides of your legs. For women, one place is often placed on top of the other in the centre of your body and below your abdomen.

Zarei is a seated bow that is performed in the formal sitting posture. This bow is usually done on traditional style Japanese tatami floors.

As the country becomes increasingly westernised, Zarei bowing in Japan is becoming less common in daily life. You may encounter it in more traditional activities like martial arts, tea ceremonies and Japanese dancing.

As with the standing bows, there are different types of sitting bows too.

Seiza is a sitting position in which you begin your bow. It is also the way you are expected to sit in almost all formal situations.

To get into the position, start from standing and kneel down one leg at a time.

Keep the tops of your feet flat on the floor with your toes pointed straight behind you.

Sit on your calves or heels and position your arms out to the side with your palms on the top of your thighs. Try sitting up as straight as possible. Good posture is appreciated.

To do this bow, start in the seiza position and lower your upper body until your chest presses against your lap.

During the bow, your hands move along your thighs until they are on the floor around 7cm away from your knees.

In the final position, your face should be around 5cm from the floor, and your palms should be on the floor in a triangle position.

This is the most formal type of sitting bow, and as such, you should spend an adequate amount of time in the bowing position to show sincerity and respect.

To perform this bow, you need to lower your upper body until your face is around 30cm away from the floor.

Just like the saikeirei position, your hands should form a triangle under your face.

This bow is common in most formal situations and traditional activities.

This is a casual type of sitting bow that is commonly used in everyday life. It is often used as a polite greeting in informal situations.

In contrast to the other types of kneeling bows, your hands don’t form a triangle on the floor.

Your upper body should dip around 30 degrees, your hands should slide down your thighs to your knees, and only your index fingers should touch the ground.

The dogeza bow is rarely used as it is seen as very disrespectful to yourself.

When performing this bow, you get on your hands and knees and place your face to the ground.

It is only used in very specific situations, such as begging for your life.

Politeness and respect are so important in Japan that bowing sometimes becomes a competition.

This is especially true between people of the same status. They may feel compelled to bow in return for every bow they receive.

This usually goes on until the bows become very small movements. At this point, both parties usually stop and move on.

Now you’ve read this article, you should have a good idea of how to bow properly in Japan.

Just remember to lean to the side when bowing in close proximity so you don’t butt heads.

You may also want to check out our dedicated blog on dining etiquette in Japan.

These skills will be very useful as a teacher in Japan. If you’re thinking about a career like this, why not apply now on our website.