Eating a traditional Japanese meal at a restaurant serves as one of the most enriching and enjoyable aspects of Japanese culture.

However, while it’s certainly an unmissable experience, it’s important to brush up on Japanese eating habits and table manners before venturing out for your first meal. This will ensure you not only display good manners, but that you also receive the most authentic experience possible.

Be it a first date or an important business meeting, it’s important to ensure you leave a good impression when eating at a restaurant. Keep reading for an all-encompassing guide to dining etiquette in Japan, including eating habits, table manners and how to eat the most popular foods.

Upon entering the restaurant, it’s customary to wait for a member of staff to greet you and ask how many people are dining in your party. If you’re being seated on tatami (rather than a Western-style chair), you’ll be asked to place your shoes in a locker by reception before entering the main portion of the restaurant.

It’s customary for diners to be seated at a low dining table on a cushion placed on tatami floor. When sitting on tatami, it’s widely accepted to adopt a kneeling position known as a sieza.

The most senior or important member of your dining party will be seated furthest from the entrance to the restaurant; a seat known as the kamiza. The person seated in the kamiza will be responsible for initiating the meal once it’s been served to your table.

When ordering food in a restaurant, you’ll need to call a member of the waiting staff over by raising your hand and making eye contact. It’s also useful to call out to them by saying sumimasen (‘excuse me’).

Once the food has been served to your table, it’s customary for the person seated in the kamiza to start the meal. They’ll do this by making a brief hand gesture and saying the term itadakimasu (‘to thankfully receive’).

Most restaurants in Japan will provide your table with a hot towel, which is used to clean your hands during the meal. However, it’s important to mention that wiping your face with the towel is considered bad manners. 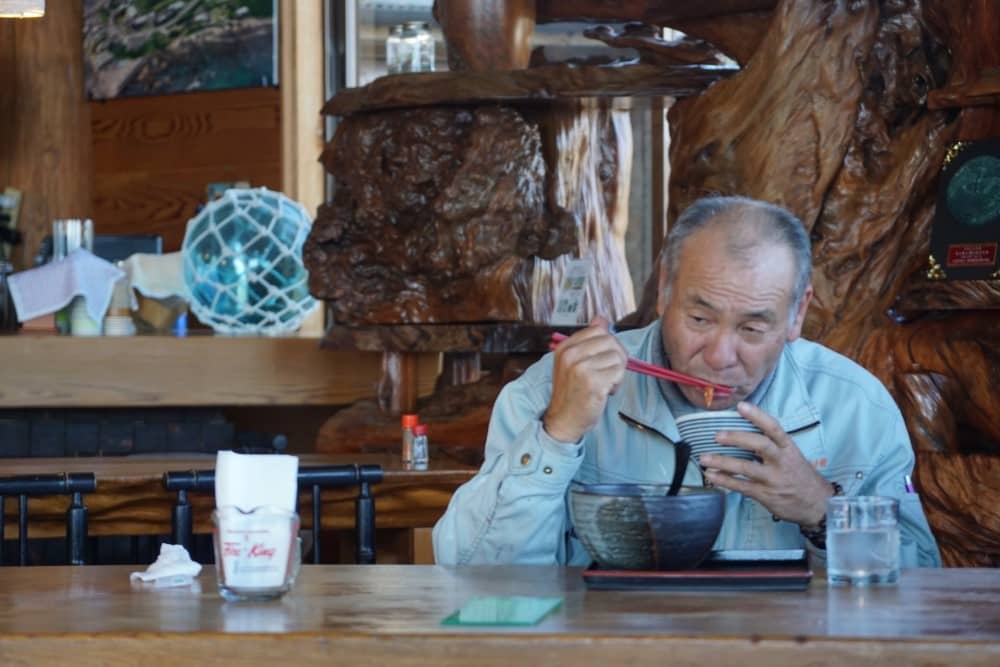 You’ll be provided with a chopstick stand known as a hashioki, which you should rest your chopsticks on when they’re not in use.

To use your chopsticks, you should:

When eating from shared dishes, it’s considered polite (and also hygienic) to flip your chopsticks around and use the opposite end to move food from a shared bowl into your own bowl.

For more information on how to use your chopsticks correctly, be sure to visit our complete guide to chopstick etiquette.

If you’re eating from a small-sized bowl, you should pick it up with your non-dominant hand and hold it just under your mouth to eat from it. This is not only considered good manners, but is especially handy if you’re not-so-skilled with your chopsticks.

When eating from a larger plate, this can be left on the table rather than being picked up.

Once you’ve finished eating, it’s considered good manners to return your dishes to the way you found them at the start of the meal. This includes re-covering dishes with any lids and returning your chopsticks to their holder.

It’s customary not to begin drinking until everyone in your party has been served a drink and a toast has been completed. The toast is usually performed with all diners raising their glasses and saying kampai (‘cheers’).

It’s customary for party members to refill each other’s glasses, rather than refilling their own. Be sure to keep an eye on other people’s glasses and offer to refill them once they’re nearly empty.

Once you’ve finished the meal, it’s important to express your gratitude by saying a phrase such as gochisosama deshita (‘thank you for the meal’). As mentioned previously, you should then return your dishes to how you found them at the start of your meal.

While there’s no hard-and-fast rule to who pays for a meal in Japan, it’s considered standard for the person who made the invite to pay for the meal.

Tipping is not a requirement in most Japanese restaurants, although it is welcomed if you’d like to do so. For more information, be sure to check out our guide to tipping in Japan. 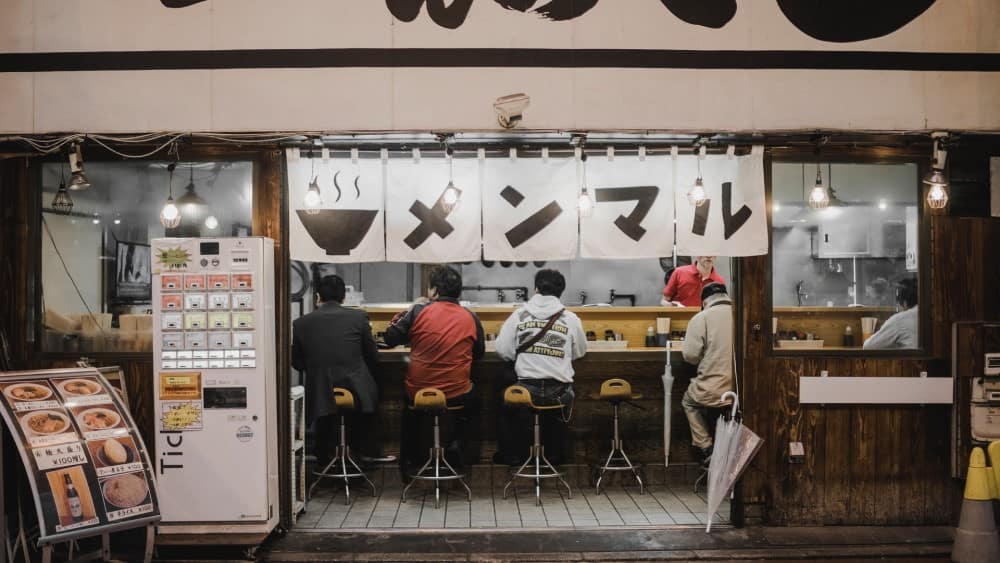 While there are no strict meal times in Japan, most Japanese people will consume meals at approximately the following times:

It’s common for Japanese people to eat a snack at around 15:00; a time known as oyatsu (‘in-between meal’).

How To Eat Common Foods In Japan

Rice will often be eaten from a small bowl, which you should hold in your non-dominant hand. Use your chopsticks to pick up a small amount of rice and eat it.

While it’s important to hold the bowl close to your face, you should avoid bringing it so close as to scoop the rice into your mouth. This is considered very bad manners.

As with the rice, hold the bowl close to your face and use your chopsticks to eat the larger chunks of food in the soup. The broth can be sipped straight from the bowl and you usually won’t be provided with a spoon.

Sashimi is usually served on a standard-sized plate, with a smaller accompanying dish of soy sauce. Use your chopsticks to pick up the sashimi and dip it in the soy sauce before eating it. Both dishes can be left on the table rather than being picked up when eating from them.

If you’re offered wasabi with the sashimi, this can be mixed directly into your soy sauce. However, be careful not to add too much or you’ll risk overpowering the dish.

Soy sauce will usually be served in a small side dish. Be sure to only serve yourself as much as you’ll need as overserving soy sauce is considered bad manners.

Food should always be dipped directly in the soy sauce dish; it’s considered very bad manners to pour the soy sauce (or any other sauce) directly over your dish. 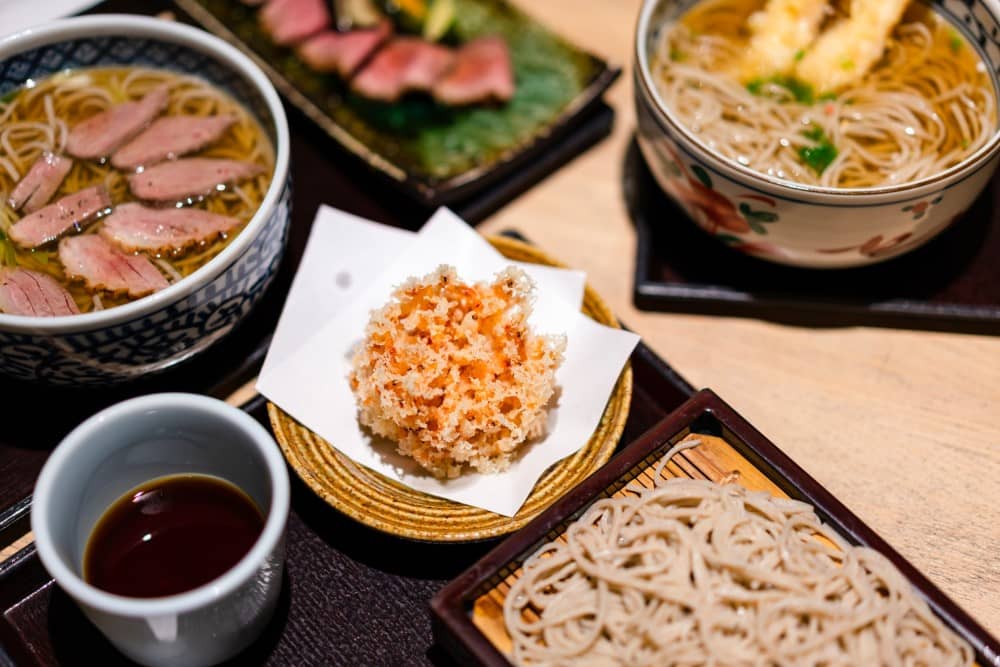 Whether you’ve just moved to Japan or are simply paying a visit, it’s important to brush up on Japanese food etiquette before your visit. While it might seem daunting, we hope this guide has put your mind at ease and given you some great tips for your first meal in Japan.

If you’ve recently relocated to Japan or are simply visiting for the first time, be sure to browse the rest of our blog for more helpful guides!