A Guide to the Main Islands of Japan: How Many Islands are There?

Every single one of these islands has its own culture, customs and traditions. However, there are many cultural similarities between the islands that are clear to see. You’ll even experience different climates on each island!

But, with so many separate islands forming one country, there are many interesting and exciting things to explore and learn about Japan’s islands in general. There’s not just one Japan that you’ll get to know – there are thousands!

How Many Islands are there in Japan?

Japan consists of a whopping 6,852 islands. All of these islands are an equal part of Japan and help to make the country what it is. The islands vary massively in size, with the largest being 227,960 square kilometres and the smallest is 4.12 square kilometres.

While the largest islands in Japan are the ones that are most inhabited, it may surprise you to know that the majority of Japanese islands are actually uninhabited.

There are 6,432 islands in Japan that are mostly deserted – no one lives there permanently. However, this number fluctuates each year for a number of reasons. For example, people may decide to leave remote islands to enjoy the convenience of a larger town, or someone might move to a remote island from a main city, like Tokyo, to experience a quieter life.

There are four main islands that are well-known all over the world. These islands are the biggest and most populous in all of Japan. 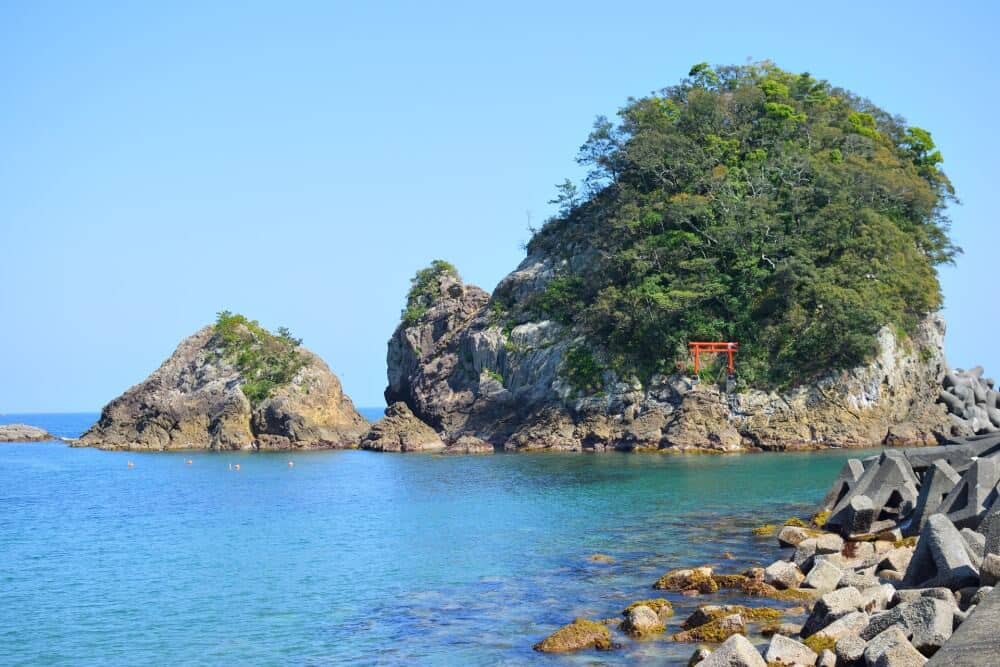 When most people think about Japan and its islands, they’ll normally know about Hokkaido, Honshu, Shikoku and Kyushu. These are the four largest islands, both in terms of population and size. Each of these islands has several main cities all with their own distinct character.

Here’s some more information on each of the four main islands in Japan.

Hokkaido is the second-largest island behind Honshu. While there are islands further north, Hokkaido is the largest one to the north. Because of where it’s situated, it’s well-known for its beautiful snowy landscape during the winter, making it a popular destination for skiing.

There are approximately 5 million people living on the island of Hokkaido. Given its size, it’s very sparsely populated – this is due to the fact that the island is mostly countryside and very mountainous. To put it into perspective, Hokkaido is the second largest island in Japan, but only the third-most populous.

In total, Hokkaido covers around 83,423 kilometres squared of land. There are several smaller Japanese islands that surround Hokkaido, with the Russian island of Sakhalin only 21 miles to the north.

Sapporo is the largest city on Hokkaido with a population of almost 2 million people as of 2015. It’s a very popular tourist destination for Japanese people and the rest of the world. Sapporo is famous for its skiing, the annual snow festival and the eponymous beer!

Honshu is the largest island in Japan. It’s also the most populous as you’ll find some of Japan’s biggest cities are found on the island, such as Tokyo, Osaka and Kobe.

Honshu has an entirely different climate from Hokkaido. The climate on Honshu is subtropical – the winters are mild, and the summers are warm and wet. In August, the temperatures can soar above 30 degrees celsius whereas, in winter, temperatures average around 5 degrees celsius.

As we’ve mentioned, Honshu is the most populous island in Japan. There are approximately 104 million people living in Honshu, which equates to about 80% of the entire population of Japan!

Honshu takes up an enormous area. This island covers around 250,000 kilometres squared.

Most of Japan’s largest cities are located on Honshu, with 58 cities on the island in total. Here are some of the main cities of Honshu: Shikoku is the smallest of the four main islands of Japan. It’s situated to the southwest of Honshu and has its own set of surrounding islets. Shikoku literally translates to ‘four provinces’ because of the four separate areas that make up the island.

The climate on Shikoku is similar to that of Honshu. It’s a largely humid subtropical climate with the wettest months being June and July, and the coldest month being January.

The total population of Shikoku is around 4 million. This island has the third-largest population density of the four main islands of Japan.

Shikoku and its islets cover an area of around 19,000 square kilometres across four prefectures. These regions are Ehime, Kagawa, Kochi, and Tokushima.

There are several large cities on Shikoku, such as:

Kyushu is the third largest of the four main islands of Japan and is the most southerly. Like Shikoku, Kyushu also includes several smaller islands or islets.

The climate on Kyushu is very similar to Honshu and Shikoku – it’s subtropical. Kyushu is also home to the world’s largest active volcanic crater, Mount Aso.

The population of Kyushu is approximately 11 million, equating to around 10% of Japan’s total population.

The major cities of Fukuoka, Kitakyushu and Kumamoto have the largest population in Kyushu. Which is the Largest Island in Japan?

Honshu is the largest island in Japan in terms of area and population. This island covers an extremely large area – approximately 227,960 kilometres squared.

It’s often considered to be the central hub of Japan due to its size, population and the fact it’s home to the country’s major cities. Historically, Honshu has also been referred to as ‘Hondo’, which translates to ‘mainland’, highlighting the importance of the islands.

Its status is largely due to the fact that it’s home to the majority of the country’s most well-known cities. Tokyo, Nagoya, Kyoto, Osaka and Kobe are all found along the southern coast of Honshu.

These cities are responsible for housing most of the country’s industry whereas, in contrast, most of the north coast of Honshu is known for its fishing and agriculture.

With nearly 7,000 islands making up Japan, I’m sure you can imagine there are some true hidden gems, and there really are.

There are plenty of beautiful, idyllic islands that are part of Japan, but there are some that might surprise you. If you’re planning a trip to Japan and want to explore somewhere totally unique and different to the main islands, be prepared to be intrigued by some of the Japanese islands that you might not have ever heard of.

Okinawa is an island south of Kyushu. Similar to Kyushu, Okinawa has a main island and then smaller islets that all make up the Kyushu region. It is only 300 miles north of Taiwan, which highlights its distance from the main four islands of Japan.

The Ryukyuan people were the original inhabitants of Okinawa and are a distinct East Asian ethnic group. Although not a formally recognised minority group in Japan, Ryukyuan people are incredibly proud of their region and heritage.

During World War Two, Okinawa was a strategic location for the US army and, as a result, has a huge Western influence. This influence can be seen in the buildings and cuisine of the island and is a popular tourist destination for Japanese people because of this.

There are drive-in movie theatres and restaurants, as well as western-style shopping malls that aren’t typically seen anywhere else in Japan.

Omishima is a small island nestled between Shikoku and Honshu that’s accessible by ferry from either island. This island is a hub for Japanese art and culture – there are several popular museums each displaying different kinds of art like the Toyo Ito Museum of Architecture, for example.

However, one of the main attractions on the island is Oyamazumi Shrine. This shrine is famous for being one of the most important shrines for samurai throughout history. Within it, there’s a huge collection of ancient weaponry and armour – 80% of its displays are registered as National Treasures.

This small island is found off the northwest coast of Hokkaido. It’s a very picturesque and sleepy island with many fishing villages along its coast.

The southern end of the island is where you’ll find the main port and town called Kafuka. It’s a very popular place with hikers from Japan, and all over the world, thanks to its mountainous landscape.

Part of Okinawa prefecture, Iriomote is very remote and the infrastructure is minimal – it doesn’t even have an airstrip! Its landscape is extremely varied and dominated by jungles and mangrove swamps. However, there are beautiful beaches along the coasts.

Iriomote is recognised as a National Park and is perfect for nature lovers. There are plenty of activities to do if you’re feeling adventurous, like snorkelling, kayaking and diving. Iriomote has its own indigenous species of cat – the Iriomote lynx is considered an endangered species.

See Japan’s Islands for Yourself!

Interested in seeing how many islands in Japan you can visit? A career through Link Japan Careers would give you the opportunity to work and live on one of these beautiful islands. If this is something you’d like to learn more about, please take a look at all of our latest job listings today.