There are around 180,000 Shinto shrines and Buddhist temples dotted throughout Japan.

Respect is important in Japan, especially when visiting a religious site. If you’re visiting a Japanese temple or shrine, there is some etiquette to follow.

Here are our tips, alongside some of the best ones to visit.

Can I visit a shrine or temple in Japan as a tourist?

Yes, you can, and many shrines and temples attract tourists and sightseers all year round.

However, they’re religious sites, not theme parks! Before visiting, it’s a good idea to research the significance of temples and shrines to Japanese people, to feel well prepared once you’re inside.

Whether you’re religious or not, show respect, keep your voice down, and avoid snacking.

What should I wear when visiting a shrine or temple?

There isn’t a strict dress code for visiting shrines and temples in Japan, but ‘smart casual’ is best.

Japan (compared to some countries) is a big fan of modest attire, so revealing clothes, even in city streets, can make you stand out. If you’re going to a shrine or temple, wear something comfy but conservative.

However, it’s normal to see people in ‘tourist’ attire, and you can get away with a t-shirt and long shorts.

Can I take photos at a Japanese shrine or temple?

Japan is a country of beautiful architecture, and religious sites are a favourite photo-op for foreign tourists. If you’re taking photos in a Japanese shrine or temple, here are a few tips to keep everyone happy.

Shinto shrines are generally more accepting of photography than Buddhist temples in Japan. However, every religious site is different, so check for signage saying whether or not photos are allowed there.

But don’t just take photos, read on to find out more about visiting shrines and temples in Japan. 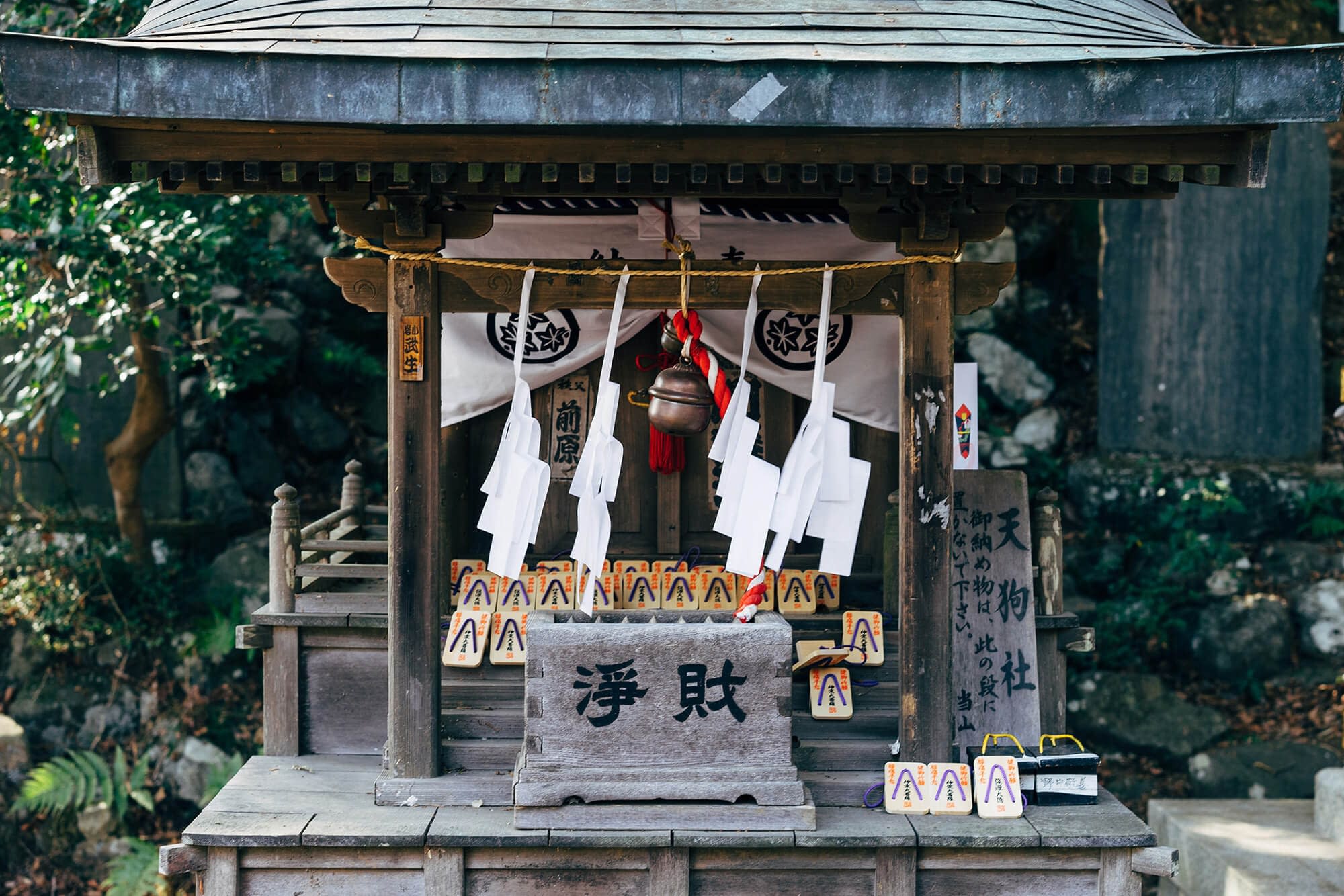 What’s the difference between shrines and temples?

Shinto and Buddhism are two separate religions in Japan, each with its own beliefs and traditions. Shinto shrines are characterised by a torii gate, while Buddhist temples have a sanmon gate at the entrance.

According to statistics, most Japanese people practice elements of both Buddhism and Shinto.

Shinto is Japan’s oldest religion and is deeply interwoven into the country’s culture and way of life.

There are lots of Shinto weddings, but funerals are rare and often take place in Buddhist temples.

Although followers have fallen, many in Japan describe themselves as adhering to Shinto, even if they don’t actively practice it. Preaching is rare in Shinto, and it believes people are essentially good.

Shinto places a lot of emphasis on nature (considered sacred) and physical and spiritual purity.

Introduced in the 6th century via Korea, Buddhism peacefully co-exists with Shinto in modern Japan.

Enlightenment or nirvana can be achieved through meditation, spiritual and physical labour, and good behaviour. If you go on a Buddhist retreat in Japan, expect silence, hard work and vegetarian food.

Some Buddhist temples are lived in by monks, so treat them as you would someone’s home. 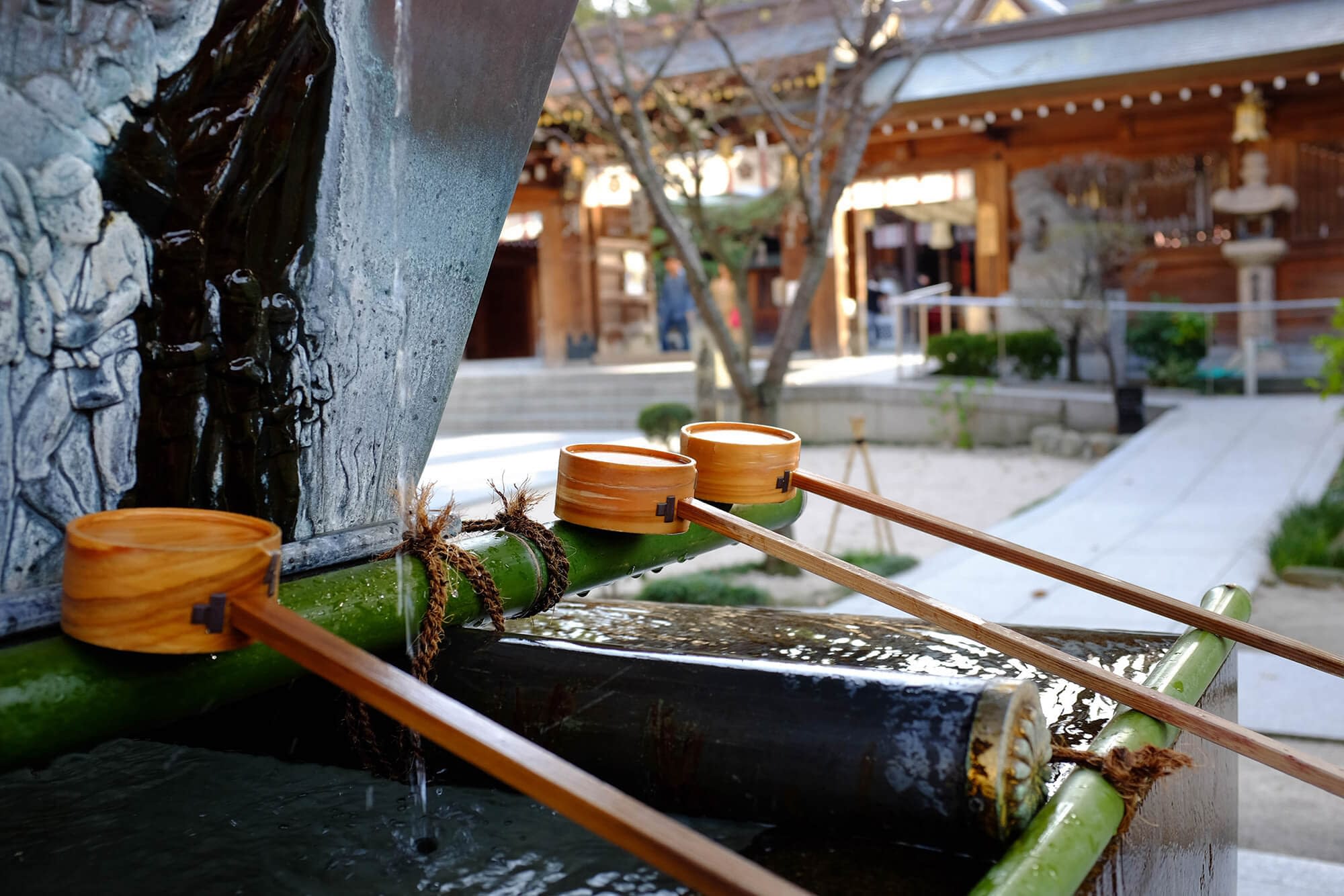 What’s the etiquette for visiting shrines in Japan?

Ready to visit a Shinto shrine in Japan? Rituals are important, so here are our tips for what to do.

When you’re approaching the torii gate, keep to the sides – the middle of the path is for kami. If you’re in doubt, look at what others are doing and copy them. You should bow once in front of the torii gate.

Shrines are considered sacred places, and you may see Shinto priests and maidens working inside.

Cleanse your hands and mouth

It’s important to cleanse yourself at the purification fountain before worshipping at the Shinto shrine.

Offer a coin, bow, and clap

Once you’re at the altar or offering hall, you should follow the correct ritual for prayer below.

Some Shinto shrines do the ritual slightly differently. It’s a good idea to watch other visitors.

Don’t visit if wounded or sick

Traditionally, you shouldn’t visit a Shinto shrine if you have an open wound, are ill, or are in mourning. Shrines are a place of purity, which explains Shinto funerals are rare (death is seen as impure). 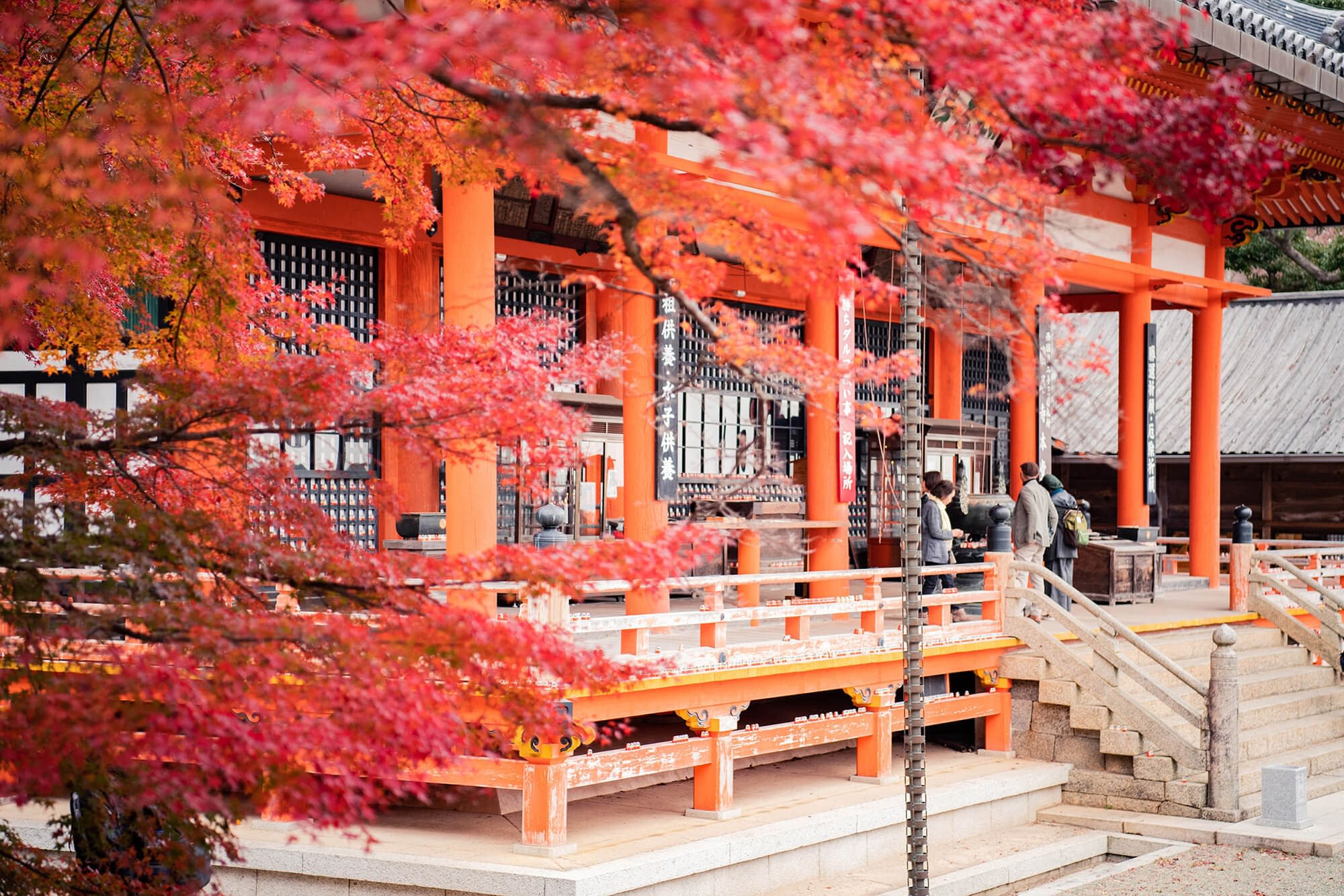 What’s the etiquette for visiting temples in Japan?

Visiting or staying at a Buddhist temple in Japan? There are key differences from visiting a shrine.

Remove your hat and shoes

Before entering a temple in Japan, remove your hat and shoes. There are designated areas to leave your shoes – it’s very rare for them to be stolen in Japan – and you can carry your headgear if preferred.

Buddhist temple sanmon gates look more like buildings than torii gates. They have a roof, and often house statues of protective deities. Like entering a shrine, you should walk to the sides and bow before you enter.

Cleanse your hands and mouth

You do this in the same way as you would at a shrine, see above for the step-by-step instructions.

Incense is unique to Buddhist temples rather than Shinto shrines, so it’s a great experience to try.

The prayer ritual for Buddhism in Japan differs from Shinto, but some elements are similar.

While inside a Buddhist temple, it goes without saying you should behave politely to any monks. Don’t try to touch or grab them for a selfie. Some temples allow you to stay with them, or offer meditation classes.

If you’re on a guided trip around Japan, or with friends, ask for their temple and shrine etiquette tips too.

Things to look out for in shrines and temples

While visiting shrines and temples in Japan, it helps to know the names of these things. There are often objects for tourists to buy, including luck charms, fortune-telling papers and wooden plaques for prayers.

Omamori – amulets sold at both shrines and temples, used to ward off bad luck

5 amazing shrines to visit in Japan

One of Japan’s most famous shrines, dedicated to Emperor Meiji (1852-1912). Surrounded by a tranquil forest, despite being in the heart of Tokyo, it’s an unmissable stop and filled with antique treasures.

A shrine complex with shrines dedicated to the sun goddess Amaterasu and Toyouke, the food goddess. Its main buildings are rebuilt every 20 years, to symbolise the Shinto belief of death and renewal in nature.

Famous for its thousands of red torii gates, this shrine also houses many fox statues – thought to be messengers of Inari. Inari is the Shinto god of rice, and the shrine is surrounded by woodland hiking trails.

Dedicated to gods of the sea and sea travel, this ancient shrine was established in the 3rd century. One of the oldest and largest shrines in Japan, it’s a peaceful escape from the bustle of Osaka’s city streets.

This shrine is dedicated to Tokugawa Ieyasu, a famous samurai leader. If you’re a fan of the history of samurai, this vibrant shrine is a must-visit. Compared to more simple shrines, its decor is breathtaking.

5 amazing temples to visit in Japan

One of the most beloved Buddhist temples in Japan, it is known for its stunning views towards Kyoto city. The temple is halfway up a mountain, has its own natural waterfall, and is over a thousand years old.

Home to many traditional Buddhist rituals, this huge temple was until recently the largest wooden building in the world. The temple houses a 15-metre Buddha statue and is next to Nara Park (famous for its deer).

Founded in 593 and Japan’s oldest ‘official’ temple, some of the complex’s buildings have been built and rebuilt many times. As well as a 5-level pagoda, the grounds host a popular flea market once a month.

One of Tokyo’s most significant temples, Senso-ji is a must-visit if you’re in the area. Colourful and photogenic, it’s extremely popular with tourists and has some wonderful souvenirs to take home.

Part of the Kii Mountain Range UNESCO World Heritage Site and home to Japan’s largest rock garden. Like many Buddhist temples in Japan, you can listen to monk sermons and join meditation sessions.

After reading our etiquette guide, we hope you feel more prepared to visit a shrine or temple in Japan. Take a look at our blog about national holidays in Japan, as you’ll have an idea of when things will be busiest.